On the run: Survivor helps three girls escape their traffickers

The girls thought they were journeying to find new jobs, but their dreams soon vaporized into thin air.

Three teenage girls grew up together in a rural mountain village in Nepal. Here, devastation from a giant earthquake in 2015 still impacts daily life. In fact, last month, the region felt a 6 magnitude quake that is being called an aftershock to the 2015 tectonic activity.

Growing up, the three friends felt the toll of a prolonged economic hardship on their families. With an incomplete education, their employment prospects were few. A few months ago, they met a man who offered them jobs across the border. They accepted the offer and set off in hope of a better future for themselves and their families.

Their hopes turned to dread as his promises vaporized into thin air. Instead of escorting them to their new jobs, he brought them to a distant town on the border of Nepal where he raped them and planned to sell them to a brothel.

Thankfully, a brave woman in her thirties, Diya, also lived in this town. Diya is a survivor who we helped in November last year. She and her 11-year-old daughter were living in a brothel and accepted our offer to freedom and a better life. She relocated to a new village and set up a vegetable stand to support herself and her daughter.

She first encountered the three girls when she was delivering tea to the town where they were staying. Having been trafficked herself, she immediately knew what was going on.

She sprang into action.

First, she reported what she saw to the local authorities. Unfortunately, the traffickers had paid them off and that avenue resulted in no action. Not giving up, Diya convinced the girls to run away. Her voice in their lives was an olive branch of hope. This gave them the strength they needed and soon they were able to escape, fleeing to another town.

Her voice in their lives was an olive branch of hope.

With eyes and ears seemingly everywhere, the traffickers quickly pursued and tried to apprehend the girls. The girls fought their way out and got away but received some injuries.

With the assistance of a trusted family, she helped hide the girls in the rural hill country. Using road-side shelters they kept the girls hidden and provided food for them. But everyone was still afraid the traffickers would hunt them down.

During this time, Diya reached out to Destiny Rescue. Our agents immediately agreed to do all they could to help. Unfortunately, this was difficult because of the country’s travel restrictions enforced to battle COVID-19. Our agents had to wait a month until their travel permit was accepted. As soon as it was, they journeyed more than 20 hours to reach the girls in their remote hiding spot. 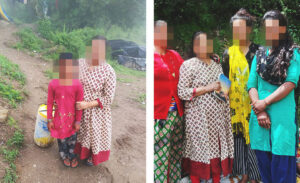 The three friends have now been brought into the care of foster families near our base and will each be helped along their path to freedom.